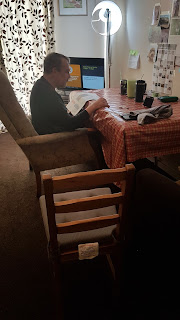 I am so, so, so, so, so glad that Nick isn’t here today. Just thinking about it makes me go cold inside. Relying on carers to help him get washed and dressed and take his tablets morning and night and in between, needing those tablets delivered or picked up from the pharmacy, requiring frequent medical interventions from an array of different services, alarm pendant always round his neck to call out the emergency response team in case of accident, and he’d had a few of those  – for someone whose body had long since put him under house arrest, he saw an awful lot of people in the average week.

I wanted to do everything for him but it was impossible. There were a few periods when Simon and I tried to do all the care ourselves but we just couldn’t have managed it for long – his needs were so continual and complex, he was so heavy, so unwieldy, so accident prone, and still so determined to have some independence that it needed two people to help him in the bathroom and even the professional carers would struggle to stop him slipping.
And there were so many of them. The council care provider promised to send the same team each week but that rarely happened. He might see 20 different carers in the space of a week, with new faces popping up all the time, or familiar ones he’d got used to suddenly disappearing.
I used to rage as yet another new person let themselves in without ringing the bell, still munching a sandwich as they came in the door, said a brief hello without taking off their coat and then scattered the tablets out of the blister pack onto the mucky work surface to put by hand into Nick’s open mouth. Imagine that now.
All that human traffic. All the other people they were in contact with. Nick so vulnerable as his swallowing and ease of breathing were getting worse all the time. He took it all with such equanimity but if he were still here now I would be absolutely beside myself with worry.

There were great carers too, of course, and these days I’m sure – I hope – they have better training: and what an amazing job they are doing just carrying on at all, going where angels fear to tread. Still keeping on and going out to work while the rest of the world is shutting down. For all the discomforts of self-isolating, it’s a luxury for those who can do it independently, or whose jobs don’t take them out of the house to go into someone else’s.

If you are highly at risk but totally dependent on another person to help you with the normal business of living, though? If all the people you would normally see are distancing themselves in order to protect you and themselves, if you are reducing or even stopping the number of care workers who come in and relying on a family carer, you are even more isolated than you already were. And what if that person you rely on becomes ill themselves?
It happened to me when I had a really bad flu the Christmas before last. Too poorly to move let alone look after Nick. Simon and a handful of other angels took over and luckily it was a slow period for breakages and other mishaps.
But it was one of the worst weeks of my life, delirious with fever and dark, hellish fears of what would become of us, of him, if this were to go on or if I got ill again. When you’re already chronically exhausted, as most family carers are, your health really suffers. It’s too bad though, when someone depends on you so completely there is simply no choice but to keep going. Other people can definitely take over in a crisis but for the sheer 360ness I’ve often talked about that being a primary carer involves, no-one else can easily do it all. That’s the trouble – you become co dependent. So being ill and unable to cope, especially if there is no dream team of angels to hand – it’s just too awful to think about. It is the carer’s worst nightmare.

I am writing this now from a different perspective, so thankful that Nick does not have to suffer, but with the memories still raw, scared and sad for all the people who are now having to do all this on their own.
Paid carers and frontline health workers with insufficient protective equipment (a doctor on the radio yesterday was saying that it's the equivalent of the wrong sort of boots supplied to British soldiers in Iraq) if they have it at all, and only the most sketchy contingency plans. Unpaid carers already at breaking point now trying to provide 24 hour support - in isolation, knowing that any pockets of outside support they do have may be withdrawn at any moment. It's a mess.
People are being extraordinarily kind and all the new connections springing up are hopeful and reassuring. When we stop being so busy for a minute, it turns out that we want to look out for each other.
But the thing about being very vulnerable or impaired is that you're already on lockdown and not really visible to the outside world, so for all the noble community help programmes, you might still get missed out.
Aside from demanding that frontline carers of all types get priority testing, if we learn anything from this situation it is that social care is something that sooner or later will affect everyone, and right now it's sooner. Underfunded, under acknowledged and poorly paid, the sector has been in crisis for years with the government wringing its collective hands but still looking the other way, and finally it cannot be ignored any longer. If any good can come out of this frightening time - and I think it will - then I hope it will involve the decision to put more money, more humanity and more dedicated attention into social care. The time really is now.