The Bravest Thing I've Ever Done.

I am a huge physical coward. I climb carefully into the swimming pool down the ladder and shudder at the idea of diving in. The very thought of bungee jumping makes my stomach turn. I don’t cycle on the road any more because I’m scared of traffic. But I did do a very brave thing, one of the bravest things that anyone can do, when I took the test to see if I would develop Huntington’s Disease.
This is in the news today and it is ten times braver to do it in public with a camera crew. A few years ago my friend Jaqui did the same on the radio.
Their courage is just astonishing.
It seemed a good time to share my story too, as I’m writing a memoir about my mum, Nick, and how Huntington’s came into our lives. It’s still work in progress but this is an excerpt about my decision to take the genetic test. I'm eternally grateful for the huge support that was around me at the time, and that for once in my life I did something really brave. 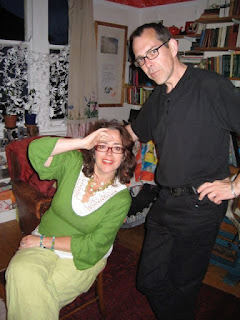 “Nick and I were having a beer, talking about Mum. The misery of her last few years, how the illness had stolen her life.
‘If I thought this would ever happen to me, I’d kill myself. Seriously, I would rather top myself than end up like that.’
He had said this before, whenever our conversation danced around the one subject that we could never quite properly talk about. But it won’t be you who ends up like Mum, I privately thought, it’s going to be me.

‘None of us know what life is going to throw at us,’ goes the saying, but actually with a Huntington’s diagnosis you do know. And it’s never good.
When you have a 50% chance of inheriting an incurable illness, the proverbial axe is always poised over your head. Or maybe the Monty Python giant foot. I don’t know if anyone not directly affected by something like this can really understand the feeling. But I will try to explain.

You are born with this built-in time bomb ticking away inside your body. And so are we all, you may say, but unlike any other illness I can think of there’s a world of difference between ‘likelihood’ and ‘definite’.
It’s not a predisposition that might be averted with careful lifestyle choices and good luck. No surgery can remove the affected part.
If you have the HD gene you will develop the illness, the one you have already seen destroying your parent or siblings, and it’s this inescapable repetition that is so nightmarish.
So, unless you are 100% sure that you will not inherit the HD gene, if it is in your family then you are always wondering – Will it be me? And if you have siblings, inevitably – what about them?
Well, how can you think about that for long without driving yourself mad?

If you’re brave enough, you can take a predictive test that will analyse your DNA from a blood sample. The test became available in the UK in 1993 and will reveal whether or not you have inherited the genetic mutation in chromosome 4 that causes Huntington’s Disease.
The blood analysis will measure the repeat sequence of Cynosine, Adenine and Guanine, three chemicals that form the building blocks for a person’s DNA. In a “normal” person, these chemicals display a certain number of CAG repeats, usually up to 35 times.
Someone carrying the defective gene will have a much higher number of CAG repeats – typically between 37 and 45, which is the inevitable marker for the illness.
Could a high number be a mistake, miscounted or misinterpreted by an inexperienced lab technician? No.
So that’s what the blood test will show – your number of CAG repeats. Significantly higher than 35 and the HD gene is stamped through your DNA like writing in a stick of seaside rock.

If so, however young and healthy you are now, there is no escaping the disease. As typically it doesn’t begin to manifest until mid-life, it can be hard to believe that you are carrying this invisible time bomb. You can disown your family, emigrate to Australia, call yourself a different name or have a sex change. But if it has marked your card, it will come for you. No escape.

The testing process is lengthy because this is clearly not a decision to be taken lightly and there are staging posts along the way where you can discuss your fears and back out at any point before actually taking the blood test. But do you really want to know? It’s such a gigantic decision that many people don’t.
As a counsellor had said to Nick and me after Mum died, ‘You are young – get on with your lives. Don’t let this dominate you, who knows what could happen, you could live in fear of Huntington’s and then get run over by a bus!’
Not the most cheering way of putting it, perhaps, but it did the trick for us. For a while, anyway.
Because it is hard not to live with some level of fear. You do get on with life, other things take centre stage and Huntington’s gets gradually shunted to the dark corners that you don’t investigate too often.
Living with that knowledge in the back of your mind is like living under a shadow; it soon becomes normal, disregardable, your eyes adjust so you forget it is there. But nevertheless….

And as you get older and approach the age when it might begin, an undercurrent of superstition starts to envelop everything you do. When you know it might be you next, your whole being conspires to avoid properly thinking about it, even though it’s all you do think about.
Generations of families can be affected in this way, knowing exactly what’s going on but not talking about it. Watching. Dealing with the fall-out of early symptoms, which can range from a slight tic to hyper-mania, car accidents, obsession, crazy spending and sudden violent rages – but somehow not acknowledging it as the onset of HD.
Even when you are actively looking out for the symptoms. You know they’re there and in hindsight it’s so obvious, but it’s as if your brain simply cannot acknowledge the significance. It’s a weird paradox.
Whole families become experts in denial because the reality is just too overwhelming to face.

So you can read up about the illness and genetic science. You can campaign, you can talk about HD and do fundraising ‘til the cows come home but when you or a loved one are at risk yourselves, there’s always a tender nerve inside that you avoid going too near.
Is this it? This twitchy eye, that dropped plate – is this the onset of Huntington’s? You worry about that all the time and yet when the evidence is actually there you can’t seem to see it. It’s the permanent elephant in your living room that you just can’t look at directly, however many times you have to walk around it.
I was like that for years, and then one day I just got tired and booked myself in for the test."