Carers’ Rights Day doesn’t stop being important for me now that I’m an ex carer.

Here I am typing in my pyjamas at 8pm, knowing that there’s no reason to have to rush out again to Nick, or to feel guilty that I am just tootling around at home rather than spending time with him. Increasingly I couldn’t bear to think of him alone, not just in case he was lonely but because of the very real array of possible danger – from choking, falling, being given the wrong medication or reacting badly to the right one, to malicious damage by the nutter upstairs – all things that could and already had happened without me there to protect him.
Nick had become as helpless as a small child, relying entirely on help from me, Simon and the council carers just to be able to get out of bed and sit in his chair to watch TV.

I don’t have to worry about these things any more. The constant worrying about him and is he safe, the fretting about the carers who could never bloody turn up on time or be relied on to get the right meds dosage or lock the door behind them, let alone wipe down his table or give him the food I’d carefully cooked, pureed and left labelled in the fridge. The endless onslaught of bills and benefit reassessments and constant breakages, never knowing what was going to go wrong next. The laboured text at 11pm, “Sis, I have broken my television / bed / chair…”, the sudden call from the alarm service, the completely unexpected rush to A&E.

Life is still unpredictable but I don’t have to carry these worries like a giant constant weight round my shoulders any more.
Since Nick died, I’ve learned to relax into an expansiveness that I couldn’t even imagine a few months ago because it didn’t seem possible, at least the only way it would be possible would be this, if he was gone, and my brain couldn’t compute that.

Carers live two lives all day and every day, managing the needs of another person as well as their own. That means nurse, cook, dietician, chauffeur and travel agent, housekeeper, stockbroker, medical specialist, virtual assistant, advocate, benefits expert, launderer, scribe, punchbag, ongoing lifeline and all-purpose trouble-shooter when things go wrong. And it means developing a rhino thick hide that will not be dented by the sling and arrows of outrageous fortune as you battle intransigent bureaucracy and talk-to-the-hand jobsworths, because carers soon find out that another giant chunk of their time is taken up fighting for what you might think would be the basic rights of a vulnerable person who can’t speak up for themselves.

I don’t want to sound chippy because in theory we still have a welfare state that looks after the frail and disabled. But navigating your way through that takes some strength, and carers get used to having to talk to the hand again and again and again until the message gets through, for the sake of the person they’re looking after.
Becoming a carer for someone you love can happen so quickly that you hardly know what’s hit you, and it can happen to anyone. It’s the hardest thing I have ever done.

Then of course there is the navigation through all the bureaucratic knots and tangles when that person dies, especially if it was unexpected. I’m still wading through that but as an executor of the estate of the deceased, no longer “Carer”.

What am I, though? Being an ex carer is odd; I’m still getting used to it. The new freedom is a gorgeous thing but it’s unfamiliar too and I am sorry to say that there are very few resources for someone who suddenly stops being a carer.
No P45. No gold watch for faithful service. No rehabilitation. No bereavement network, no employment support, no steady ground under your feet. Carers’ Allowance mercifully continues for 8 weeks after someone dies but everything else stops dead too and that’s that.
Some people have known nothing else but their caring role; how are they supposed to find their way in a world that barely recognised them while they were actively being a carer, let alone now? When the financial constrictions of caring, which have STILL not been addressed by any politician I’ve come across from any party, leave most carers unable to save even if they can work alongside their role, while what savings they might have had are drained by the constant erosion of buying disability equipment and specialist goods and all the other seemingly small things that add up to a lot.
I’ve been bailing Nick out for the last ten years in dribs and drabs and it adds up to a lot. It was the price of love.

This has happened to me the year I turn 60 - too young to retire but with no foothold back into the ‘real’ world, I’m still blinking in the sunlight like a newly released prisoner who doesn’t know what to do.
Yes, I’m worried about the future and I need an income but if caring has taught me anything it’s to be resourceful.

And angry, if you want to know. Why are unpaid carers still not properly recognised for the work they do and the contribution they make to our economy, the billions they save the state? The current Carers’ Allowance is a mockery as it doesn’t align with the new Living Wage and no-one at HMRC seems to have done their sums about this, or give a toss.
Why have we not heard a single politician standing up for carers as they present their election promises? Why is there no support for former carers who are presumably expected to fit neatly back into a world for maybe years has pretended they don’t exist?

On Carers’ Rights Day this year, I’m not a carer any more but I still think like one. And we deserve better. Please, don't think that because it doesn't affect you it doesn't matter. Sooner or later most of us will need care or be carers. Don't turn a blind eye now.
You can join the We Care campaign (@WeAreCarers) with a click of a mouse, you can vote for a politician who cares about social care, and yes, you can share this message.
Thank you.

Imagine you're a doctor whose patient has a rare but deadly hereditary illness which will be passed on to their children. Until your diagnosis, the patient and his family had never even heard of the illness, but it's something so terrible that the patient makes you promise not to tell his pregnant daughter in case the news drives her to suicide.
When the daughter does find out she may inherit this illness, she tries to sue you and the health authority, saying that she would have had an abortion if she'd known.
Sounds like a slightly far fetched plot from one of those TV hospital dramas, doesn't it. Unfortunately not.
This sad story has been in the news this week. Believe me, the circumstances might seem extreme but the basic story line is just a variation on a well-known theme for families affected by Huntington's.
If you have any kind of close knowledge of HD you will probably nod in sympathy but not feel at all surprised. Because - what would you do? 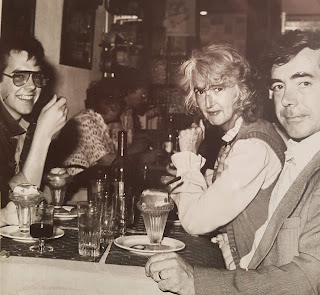 I wonder if you can begin to imagine the secrets and lies and the pussyfooting around that go on in a family where someone has Huntington's. It's not like any other illness; if someone in the family has it, then someone else will too, and the next generation - no buts nor ifs, it's just a question of who, and when. Not everyone can handle it. There's a dramatically higher rate of suicide than with other long term medical or neurological conditions, while suicidal thoughts increase exponentially for people expecting a positive diagnosis. No-one wants to rock that boat for someone they love. It can be easier not to talk about it, just bury your suspicions and pretend it's not happening, and many families do; I'm sorry to say that ours was one of them.

That's Mum, Dad and Nick in the picture - Mum in the early days of her illness but pre-diagnosis.

She'd been gone a good fifteen years or more when my brother started getting into financial trouble and couldn't seem to pick up a cup without dropping it, and had pranged his car yet again. At first we didn't want to believe it but we watched...watched the minute little jumps of his leg next to mine on the settee and the repetitive kick of his foot, heard the odd new catch in his voice. We couldn't be sure it was the onset of Huntington's but the signs were all there. I thought it but I couldn't voice it, and when my dad and I finally did say it out loud to each other we both agreed we were afraid to say anything in case it tipped Nick over the edge.
He was so low at the time and had always said that if he ever thought he was showing early signs of the dreaded illness, he would jump off a bridge. Or drive his car into a wall, late at night. He had said all along that he would kill himself rather than end up like our mum. What were we to do, call his bluff? So we watched, and waited, and read the books and did our research but didn't say anything to the person we loved so much because we were so afraid of what he might do. I hated myself for it but also knew just how stubborn Nick could be, and what a capacity he had for self destruction.
We all lived in different cities apart from each other but we were all tiptoeing around the same elephant in the room for three whole years.

The saddest thing was that when Nick finally put two and two together and acknowledged to himself what was happening, he felt relief. And now he knew, he didn't want to kill himself, he wanted to live. But he also wondered why, if the signs had been there, no-one had said anything.
And I had to tell him that I had been afraid of his mental state and just hadn't dared to broach what was, either way, a death sentence.

Now Nick is gone, and with no HD marker in my DNA to pass on to my son, I've got no direct line to Huntington's, but it still affects everything. I hear stories like this in the news and feel like a Greek chorus commenting from the wings, wondering what I would have done in that situation, or what I could have, should have done differently with Nick. His children are growing up, and at risk. They've seen what happened to their dad and read this blog, but they also need to get on with their lives and studies and their own hopes and dreams, and for a few years concentrate on those.

But what should families say to each other? How do we talk about this most difficult of subjects? I still don't know how we would have done things differently with Nick in the circumstances, but if you know you have Huntington's in your family then my belief is that you have to say something.
It's not the absolute end of the road. None of us wish an illness like that for ourselves or our loved ones, but gene positive or no, we should live the fullest life we can with the health and resources we've got, and if you do know you're going to develop the illness then now is the time to just carpe the bejaysus out of the blessed diem. But that's easy for me to say, isn't it?