I have kept my diary for 2019 and every now and then look to see what we were doing this time last year. So much has changed since then that it almost feels like someone else’s life. It’s now eleven months since Nick died, and this time last year we were packing for him to go on holiday to Sandpiper’s in Southport. He was so looking forward to it.
We had bought him a new sponge-bag for his toothbrush and shaving things, and a very nice bottle of cologne. His radio, his little clock, his bibs and special sippy cup for his wine. I’d ironed his favourite shirts and sent exhaustive details of his medication and health issues to the medical team at the centre. He thought he might even try the hydrotherapy pool this time, so we'd packed an ancient pair of swimming trunks he probably hadn't worn for ten years.
Driving over the Snake Pass, we played some of his old favourite albums from boyhood – Dr Feelgood and Alex Harvey – and it was one of those truly happy times, that childish thrill of setting off for a holiday and singing along to favourite tunes with the car windows open and sun in our eyes. Being together having a craic, the way we always had. Being Nick, he was already wondering what they were going to give him for lunch and what time the bar would open.
I had no idea that he only had a few more weeks to live. 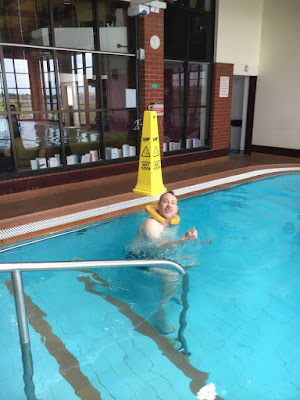 Fast forward a year and I get a lump in my throat from this photo. He was so happy. He went in the hydro pool every day and loved it - the freedom of being in water, weightless for once. Every time I look at my diary and see what we were doing last year, it's a wrench to the heart and I miss him. We all do.
But I’m still so very thankful that he missed all this. It would have been awful for him, already with a nasty rattle in his chest and struggling to eat or drink without choking. I would have self-isolated with him as so many brave souls have and continue to do, and it would have driven me round the bend, but so much worse for him. The lockdown; the fear; the isolation; the carers coming in visors and masks or not coming at all, because he would have been so vulnerable; the not being able to go to the pub or out to lunch, yet another one of his few pleasures taken away, and the heart-breaking stoicism he would have displayed throughout. As the rest of the world makes tentative steps towards normal, it’s easy to forget that thousands of families are still in this situation, even more closed off than they were before. Largely ignored by politicians, shamefully so. Invisible.

I can’t help doing a countdown of the days as we approach the anniversary of his so sudden death. Is that ghoulish? Or does everybody do it? Hard not to, when you have last year's diary marking out the passing time.
We will certainly mark the occasion; I thought perhaps a little socially distanced gathering in a local park, all drinking a spritzer in his memory. And it will also be a toast to all the carers out there, staying indoors and looking after their loved ones, somehow trying to keep safe and keep sane and treat each day together as the precious thing it is.