'January 11th. It’s Nick’s birthday and we’re driving north and going out to lunch with his ex wife and his kids, at a place he used to like when he lived in County Durham.
I’ll order a white wine spritzer in a long glass and we’ll raise a toast in his honour. He just won’t be here in person.
A year ago today I took him out to an Italian café where he insisted on ordering spaghetti. I watched him struggling from across the table, trying so hard to not rush to his rescue but let him have a chance at independence, until he asked, ‘Will you help me?’
I was used to doing this discreetly, leaning over to cut up or mash the food on his plate to make it easier for him to eat by himself, where possible prompting him to order things that he could eat by himself without too much fuss. Unfortunately, he really liked spaghetti and noodles and he was a stubborn so- and-so, always had been.' 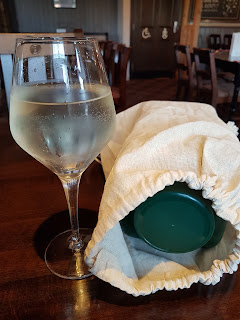 I love the drive up the A1, watching the skies gradually widen away from the cities, Nick with me on the passenger seat as a plastic tub of ashes in a Christmas bag but also in spirit. The times I’d driven to see him when he lived up there, the times he’d been beside me on those country roads ending out of Durham and through one of the landscapes I love most in life. He was there in the road and the trees and the music on the CD player (David Bowie, of course, who died on Nick’s birthday) and the huge rainbow suddenly stretching right across the sky as we came towards Consett. At the pub, waiting for the others to arrive, I sipped at the spritzer, Nick still beside me, and raised a silent toast. The wine came in a stemmed glass; Nick would have knocked that over in seconds flat, but that was then and this is now, a small concession to our changed circumstances. The music in the pub was astonishing, though, all his favourite songs, almost as if they had known. He'd have just loved it.

Later, sitting around the table with Nikki and the children, we talked about the great party he'd had for his birthday last year, how many people had come, all the cards and presents and food and what fun it had been. The expression on Nick's face when he saw George and Elene walk through the door, surprise guests of honour. I knew things were changing and that the effects of the illness were getting worse, but none of us could have guessed that he wouldn't be here now to celebrate another year. Well - not here in person.
We have not yet decided what to do with his ashes so his children are taking them home for a while to think. Maybe under a tree in some beautiful woodland glade, maybe scattered to the four winds by the sea (I've kept some back to do this in the peak district) but what matters is, we are keeping his spirit close. It's always there, he's always with us, it's just different.