We spent Christmas at my in-laws, who are some of my favourite people in the world. Being with them is like a home from home. So why did I wake up on Christmas morning with a stone in my chest and the most indescribable sense of loss? Needing to fetch the heavy plastic tub from its box under the tree and sit cuddling it, bereft. It’s all that’s left of Nick in physical form. I know he’s gone. I know it’s ridiculous. It was probably pretty ridiculous to take him with us in the first place to spend Christmas together, but he loved Christmas and I wasn’t going to leave him on his own. This was the first one without him in the world since I was four, and grief makes you irrational. 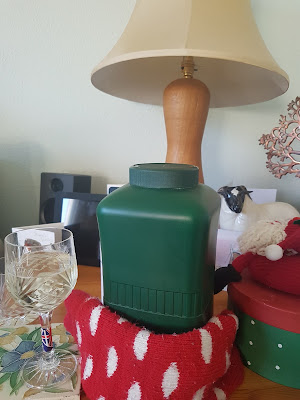 I’m also aware that he was so lucky to go when he did, and how hard things might have been by now, how difficult he was finding it to do so many things, and starting to dread the prospect of eating when all his life he’d been such a foodie.
It made me think of all previous Christmases we’d had and their changing choreography as his illness began to manifest. This one I remember in particular because Nick was still living in his house in the north east and relatively independent – or so I had thought.
Just four years ago. I wrote about it in my diary and it’s part of the memoir I’m writing about Nick and Huntington’s and how it affected our family. It was one of those near disasters where you end up having such a good time that it becomes one of the best times. It still makes me smile.

Christmas 2015
It was Nick’s turn to have the children with him for the few days after Christmas. We arranged to have a second Christmas with him and the kids, travelling straight up north after being at Simon’s mum’s. Nick said he would cook a turkey and to leave it to him. I must have been a wee bit doubtful but he’s been coping so well lately. Trouble is, while always watching out for change, I don’t seem to see it until it’s too hard to ignore.
We drove up north on the day after Boxing Day. There had been dreadful floods throughout Yorkshire and the north west and as we crawled slowly up the A1 we saw half submerged trees in what had been fields and were now lakes. By the time we arrived we were hungry. Simon’s mum can never let us go without at least one bag full of cake, fruit, cheeses she has got in specially, whatever they won’t be eating now the guests are leaving, so we were laden with goodies: mince pies, home-made cranberry sauce, left over roasties and some little cocktail sausages. And a stick of sprouts, some carrots and a bottle of fizz. Nick had said he would provide everything else so we just needed to bring ourselves and whatever we were drinking. Finally we knocked at the door. There was great excitement to see each other and the children immediately tore into their presents while we opened the wine. Something was missing though – what? Oh, yes - where was that background hum of the delicious scent of roasting meat? (This was just before I turned vegan...)
‘Shall I help you get the dinner on?’ I asked Nick.
‘OK Sis.’
We went into the kitchen.
‘Where’s your turkey, Nick?’
He fumbled in the fridge for what seemed a very long time and then produced a small cardboard package. Inside was a frozen turkey roll, clearly labeled as ‘Serves 2 people.’ There were six of us.
Simon came in, ravenous after the drive and wanting to get dinner started.         ‘Shall we put the bird in the oven then Nick?’  He didn’t notice my frantic eyebrow wiggling and grimacing.
Nick looked a bit shifty. He started twiddling knobs on the cooker while I rummaged in the cupboards to put the roll – looking smaller all the time – on a roasting tray. Nick fiddled about some more with the dials. Then –
‘It’s not working at the moment.’
‘Oh-kayyyy…what about the microwave?’ Another long silence.
‘That’s broken.’
I’m honestly not making this up. In his mind he was going to cook a turkey banquet for six people, even though what he actually had was a tiny frozen ready meal thing and no oven or microwave. There was no point in getting exasperated, we were way beyond that. We would have to improvise.
I cut the turkey roll into shreds with a pair of scissors and we put it in a pan to fry with some onions and then added the sausages. We made bubble and squeak in another pan with the leftover roasties, chopped the carrots raw into sticks, and the kids persuaded us to forget about the sprouts altogether. Meanwhile, the adults opened another bottle. There was lots of food to go round and it was all delicious. And in the end, much more fun. We had to work together and pull what could have been a disaster into a good time – the stuff that often makes a family gathering memorable, especially at Christmas. And Nick was the host with the most. But I think we need to look at some home help for him in the New Year before someone gets poisoned.’