It was my birthday this week. The floor is still covered in bits of pink tissue paper and there is an alarming amount of chocolate and gin on the premises. It’ll come in useful, I’m sure.

Birthdays always make me a bit emotional, amazed and deeply touched to be at the receiving end of so much love and attention (like this year, when I have neglected my friends and been grumpy with my family and it really doesn’t feel deserved).
I’m a lucky girl. 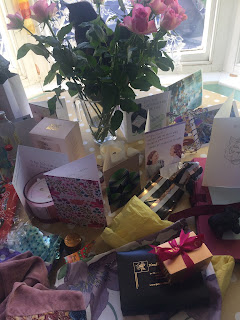 I’m also aware of time passing and that Nick has now been in Sheffield for a year; he arrived at the beginning of May 2017 and gosh, how much has changed.
It has sometimes seemed that we’d unwittingly won a competition to demonstrate Murphy’s Law, that every possible thing that could go wrong, did go wrong. Benefits and social services stopped, messages lost in cyberspace and the simplest seeming thing lost in translation. Everything, as if he’d vanished like a Jason Bourne by just moving from County Durham to Yorkshire.
I’d spent the six weeks before he moved talking to the local authority, the Jobcentre, social services and telecom company to register a change of address. I’d sent Power of Attorney documents by recorded delivery, had long conversations with officers in various departments and was reassured that the transition would go fairly smoothly. But no. Ohhhhh no.

I started calling it the Nick factor. Even the chain of opticians he’d always used suddenly lost all his details and had no record of any previous service, though his old branch in the north east knew him so well that they’d pull up a seat, get him a drink and replace his glasses three pairs at a time for free because he broke them so often.

Hours on the phone, dozens of dead ends, sending more registered letters and patiently re-scanning documents; meanwhile panicking about money because suddenly he had no income and was ripping though his savings, and panicking about the scale of his drinking, constant chest-pulsing panic because I’d had no idea it was that bad. And at the same time trying to protect Nick from my dismay because only when he came to live here permanently did I understand how much worse his health had become.

And now here we are, and we’ve become acclimatised to the new normal. Nick is living in a lovely flat ten minutes away from us, he feels safe and has settled into a routine that suits him. His various benefits have finally been reinstated (though I say this knowing that PiP may be just around the corner), and with a little care we can manage.
His TV is working and he can watch Netflix to his heart’s content.
We have compromised on the wine so that it’s now a box of lower-alcohol Perry a day rather than the 12% Chardonnay, and, cross fingers, we have just about got his care provision working out at long last.

So we’ve come a long, long way. It’s best not to look back, though.
This time last year, Nick could walk to our house, just round the corner from his old flat, and even to the shop a couple of hundred yards down the road. He could converse by text, make a phone call and pick up the receiver when I rang. He could make himself something to eat and feed the cats. He can’t do any of these things now.
I worried at first that it was laziness, now that he had us running around after him, but I don’t think that’s the real reason, which is simply that he just can’t.

When someone you love has a long-term illness it’s like a living bereavement. You grieve every day for all that has been lost and the pity of it all. You miss that person even while they’re alive. Obviously you don’t sit about wailing like a Victorian widow, you get on with the here and now and enjoy the time you have and find new ways to be together, but it is a fine art.

There are daily stresses and troubles, more than I can count, and every time I think we have come through a particularly bad patch of turbulence and can relax, something else happens. When you care for someone with HD I don't think you ever really relax. But here we are, a year on, and if this tumultuous year has taught me anything, it's that there is no point looking back to the way things used to be, and definitely no point trying to anticipate the future. Better to just try to be here now. It's my birthday week, licence to drink fizz and eat chocolate and the presence is my present.