To my Mum on Mothering Sunday 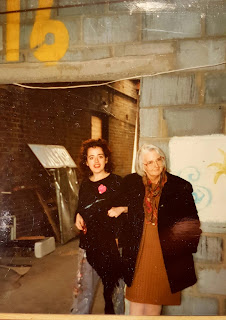 Mothers’ Day will always be poignant when your mother is no longer around, but especially for those of us who lost our mothers early. I was still a teenager when Ma started behaving oddly, and the typical irritation and separation of a hormonal girl towards her mum was only exacerbated by her embarrassing twitches, her OCD obsessions about the smallest things and her terrifying tantrums.
I always loved her, but it was Dad that I turned to for support because Ma was too unreliable, and needed so much support herself. I wish I had been able to give her more, but I was young and immature and didn’t know how.

Now that they’re both gone, it’s Dad that I miss every day but it’s mum I wish I could go back in time to meet. To show her that I’ve turned out pretty much OK, that I met a man in many ways like Dad whom she would have loved at first sight, and that she has three beautiful grandchildren. I can’t put her essence into words but as life has gone on without her I carry it with me and it gets stronger all the time.
I’m glad she can’t see what is happening to Nick. Her little boy, her darling.
I don’t know how much she realised that one of us would inherit the HD gene from her, we never talked about it because we were all too busy coping with the day to day.

Dad knew, and tried to protect us all from the full horror of it. He wanted Ma to have the best life possible and for me and Nick to grow up with a normal person’s hopes and dreams, not under the lengthening shadow of an early death sentence. It kind of worked, but if you have witnessed HD in the family you can’t ever live an entirely normal life, always waiting for that toss of the coin.

Now it’s me wanting to protect my niece and nephew from the full knowledge of what could be to come - with medical science making new leaps all the time, I only say “could” because the prospect of diverting the illness in their lifetime is very real and we have to lay all our hopes on that.
I want them to have fabulous lives and not worry about HD, even as they see their dad gradually deteriorate and lose the power to talk properly or hold his head up without nodding. I want them to make him, and themselves, proud, and to look forwards to a bright future without worrying about a distant cloud on the horizon that might never break.

So it’s a strange set of feelings as we celebrate Mothering Sunday.
If anything Nick is ten times worse than I ever remember Ma being, apart from the tantrums - he somehow escaped those. But he can't put a spoon in his mouth or eat an apple or walk more than a few shaky steps, and I am glad she isn’t here to see that. I hope though that she would see we have stuck together, that we love each other and our families and that I will go on caring for Nick throughout his illness and trying to raise awareness about HD.
I hope she would be proud of us both, and think that along with a rogue chromosome in the DNA she made two fairly decent human beings. You’re in my thoughts today, Ma and this blog is for you.