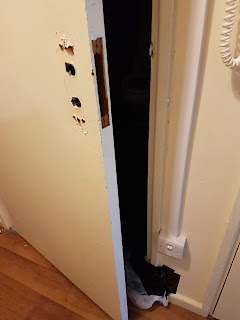 It’s been seven hours and twenty seven days and I wish I felt as poetically mournful as Sinead O' Connor in the video but no, I’m just hopping mad.
My brother’s bathroom door is still unmended and the council repair team have come to measure it four times and gone away again.
I’m not joking. It’s like Right Said Fred.

The door is still wedged with a bag of cat litter wrapped in polythene and gaffer taped to the frame, and the carers have all been showering him with the door open. He has to use the loo with the door wide open and so do they, and so much for respect and dignity. Aside from the danger of Nick getting stuck when he’s on his own, it’s really awkward for everyone.

I sent a complaint to the council who replied that I would get a response within three days. Ha ha! Still waiting.
Went in to their offices and demanded to see a manager.
“I’m not supposed to do this,” said the sympathetic officer I saw, “but you could try calling ----- on this number”
But that was a week ago and I still haven’t been able to get through. This magic person is based in an office on the other side of town that I simply don’t have time to trek over to on the off-chance that he might be in.

Do I call the local paper? Get them to come round with a photographer to take a picture of me and Nick pointing at the hole in the door where the handle should be, and the home-made stopper (which is bearing up surprisingly well in fact, and thank goodness for that) ?
I am very very tempted to just organise a fait accompli and let Nick get stuck in there and have to call out the alarm service, but it is too unfair on him – even if I explain really thoroughly what we’re going to do, he will get flustered and panic.
He was such a mischievous little boy and I still see glimpses of that, just every now and then, but mostly there is no room for naughtiness or bucking the system; he needs things to be routine and ordered and the same as they were yesterday.
It’s me that wants to buck the system, and I think for bloody good reason.

I’m also scratching my head about Nick’s wheelchair, as the electric wheelchair we were so excited about has turned into more of a curse than a blessing. Most of his outings involve car travel, especially now the weather is getting colder, and it won’t go into the car unless we dismantle the power pack and even then it is terribly heavy and unwieldy. It’s not really meant for manual use so I’m worried about the tyres too. Simon and I are so used to lugging things about and getting barked shins and bruised ankles that it doesn’t matter to us, but I can’t expect carers or friends to risk their safety, and the carers who are supposed to take him out on a Saturday are all saying it’s too heavy to lift or that they can’t get it into their car. So the great treasure has turned into a complete liability.
We need to get a collapsible one, but Nick has already broken two of those with his weight and super-strength. Are there any portable wheelchairs that are vaguely HD proof? And would we even be able to afford it? I need some advice. The OT and physio are coming to see him tomorrow, so here’s hoping.