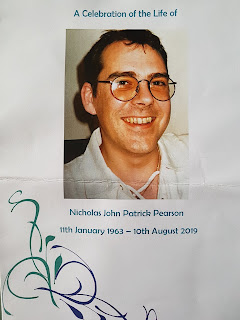 We had such a splendid send-off for Nick on Friday. As funerals go, it was a jolly good one and I was so touched to see people from all parts of his life there to say a last farewell. It was a day full of music and conversation and even laughter, a proper celebration for a life so well lived.
It doesn't quite feel like goodbye; he's with me in so many ways and as we had to clear the flat in such a hurry, the memories are all around me and will be over the next few months as we slowly sort out the rest of his things.

Everyone spoke so beautifully and from the heart. This is  part of my eulogy for him, thinking about the last few years together and what they have meant.

"...When I think of Nick in his glory days he seemed to collect watches, nice pens, designer clothes and girls without even blinking. He had to look good for his work as a hotel manager and he always had the sharpest suits and the repartee to match.
He met a woman he adored who was more than a match for him and they got married and had two beautiful children and when you look at the photos from those years you can see how radiating with happiness he is. He really just seemed to have it all.
So it was particularly hard that of the two of us, he was the one to inherit HD, one of the nastiest illnesses that anyone can have. It seemed so cruel when he'd already cheated death twice in spectacular style. I felt I should have taken it on, not my little brother. But the miracles were all used up and his luck had run out.
Little by little the effects of the illness took away everything - his livelihood, relationships, money, his mobility, his dexterity and his speech, the capability to wash or dress or feed himself, his ability with figures and words and his mental alertness. Even the quick-off-the-mark sense of humour that had been his super power. You could weep with rage about it and the pity of it all. Also, he was absolutely deaf as a post.
"Somebody Up There Likes Me" might seem like a strange choice to play for someone who lost all his luck.
Nick had asked for it to be played at his funeral, and I have to admit I raised an eyebrow.

But then I started thinking about the real miracle of his life: The way he dealt with his illness and his courage to keep going. Although he had lost so much, he always kept his dignity. When he had lost so many of the things we think make someone a man, he became more of a man.

Never complaining, always cheerful and stoic, grateful for everything anyone did for him and happy to see you.
Despite everything that could have knocked him down he was still up for it, still engaged with life and looking forward to things.
He made friends, he had family and children who loved him, he had his nice flat and his cat and his boys' nights out and lovely people taking him out to lunch; he had his wine and his Netflix and his hot shower every morning.
The fact that not just once but twice, by pure luck he had ended up living just a few minutes' walk from me and my family. What are the odds of that happening with a council flat?
I realised that he actually felt lucky, and yes, he really was. And the way he died was maybe the luckiest thing of all - happy, relaxed, out for lunch with one of his favourite carers at the pub he always used to go to as a lad with his friends when his whole life was just beginning - no pain, none of the terrible long drawn out deterioration I was secretly dreading. Instead his heart just stopped.
He quit while he was ahead, but what has been clear through all the shock of sudden parting is this - his life was transformative.
He inspired and encouraged so many people and every card and tribute we've had says the same thing.
I feel so grateful that Nick had the life he did and felt as loved and connected as he did and that his spirit has so touched the people around him.
Somebody Up There definitely did like Nick, and it's why we are all here today to celebrate his life. What an extraordinary one it has been. You are an inspiration. Here's looking at you, Bro."