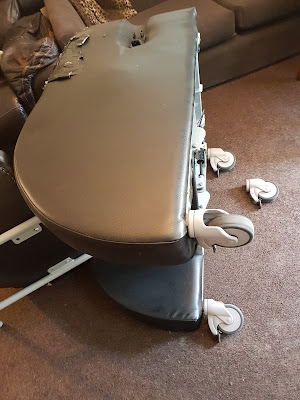 How is it possible for a person who can’t walk more than a few steps or wash and dress himself, to generate so much chaos?
I ask myself this for the 500th time.

I used to call it the Nick factor, the way that if anything could possibly go wrong with almost anything you care to name, it would do.
Now I wonder if it is just the way things are for anyone with an impairment and their carers, and if, for all the various avenues of support from government and social services and healthcare, life is just not set up for us.
And with complex conditions like Huntington's, there are so many factors - not just the physical symptoms which we all know are horrible and many, but the mental and cognitive and social and financial and all the other knock-ons that simply don't fit so easily into a simple category of "illness".
And also, with HD there is so little that’s predictable. And it all happens at once.
And I am on the alert almost every minute of every day and yet never quite prepared.

As is often the way, I came back from a lovely weekend away to a whole deluge of new crises.
I don't usually wash or dress Nick as it needs two people, but was helping him put on his pyjamas and saw a nasty looking pressure sore on his bottom that the carers have either missed or ignored.
There’s no record of any concerns in their daily log, and there’s not even the standard issue body map diagram showing which areas to be aware of.
Why the hell has no-one noticed this? It looks like a stage 2 to me, where the skin is broken. This is serious.

His special Omega chair with the inbuilt pressurised seat has been knackered for months so that can’t have helped. Today it gave up the ghost. It just kind of collapsed from under him, he said, and the castor came off, leaving it capsized on the floor like a poor old dinosaur.
Thank goodness he wasn't hurt. It's the only thing he can easily sit on for long though, and the spare armchair is creaking dangerously with every shudder and kick, only made worse by the fact that he is so uncomfortable there.
We need to get hold of the physio so she can authorise the manufacturers to come out to do a repair as soon as possible; but when I ring, she's on holiday for the next two weeks.

a worrying message on Nick's phone from his bank about low funds, and looking at his online banking it transpires that there have been three lots of £98 debited from his account by the council. Whaaaa?!!!? Thanks to his housing benefit and various exemptions, it's supposed to be under a tenner.
I get on the phone and manage to talk to someone who is as confused as me but thinks it might be something to do with a default setting by their computers when Nick’s housing benefit was recently re-assessed. (i.e we got four identical letters saying that as Nick’s circumstances had changed and he had not informed them, they were suspending his housing benefit. I know the ropes by now and apart from a knee-jerk email that I knew no-one would ever reply to, just sucked it up and made the journey to the council offices with a big sheaf of evidence to show that Nick’s circumstances had not changed and here was the proof. A week later it was reinstated and I gave a little cheer.
“But by the way” I had asked the advisors, “this won’t affect his rent will it?”
No, I was told, because he is in credit with his rent payments and the Direct Debit is ticking along as usual. Phew. All good then.
But apparently not, as some kind of computer / human blip has alerted a default payment and Nick’s weekly direct debit has rocketed up to nearly a hundred quid, with no notification whatsoever.  And no, they can’t refund it at their end. They will send me a form to fill in which will take up to four weeks to process – never mind that he is quite spectacularly in the red right now and all his bill payments are about to bounce.
How can this be happening? I call the social worker for advice. She sends me a link for a crisis payment, because I can’t keep funding Nick for everything, I’m struggling these days to pay my own bills (Carers’ Allowance = 3p an hour according to one of my online friends) and surely the council need to take some responsibility here. An unannounced rent rise of 10 times the agreed rate?
A bit of researching reveals that the housing benefit department and the rent department are not even both part of the local authority. One of them is a privately contracted company and communications are generated by numerical calculations rather than people and words.
Holy Moly. It’s not quite Gilead, but we’re definitely in Terry Gilliam Brazil territory.

Oh, and even though he was supposed to have enough to last the week, Nick has run out of wine, and his left hearing aid isn't working.

There's more, but these are the things I need to deal with most urgently and after two fairly full-on days, they're all sorted. The District Nurse has been to dress and check the sore and supply a blow-up pressure cushion which eases the discomfort of the creaky armchair and the Red Cross emergency repairs team have come to the rescue and reassembled the broken Omega.
And after four more phone calls I found a mole at the council who told me to call Nick's bank and request an immediate refund under the Direct Debit indemnity clause. And indeed, as the debit agreement was for a stated weekly amount and this wasn't it and there had been no authority to change it, they didn't bat an eyelid and put the money back into his account straight away.
I've checked the hearing aid and he had somehow, heroically, put in a new battery himself but not had the dexterity to remove the little orange sticker on the back so it wasn't activated. Simple thing to fix.
And I have done an online shop and got more wine.
So, phew.

Nick is happy again and much more comfortable; he's got his radio and his chair back and a dressing pad on his bottom. He's over the moon. The nurse will come in again tomorrow and he has money in his account again and he doesn't seem to be struggling to eat quite as badly as he was last week, and just for the rest of today I feel I can breathe a bit easier.

But this is Huntington's. It's not only the awful jerking and spasming and losing the ability to swallow. It's not only the memory loss and the mood changes and the accidents and the super-strength. The addictions and the obsessions and the reckless spending and the dental problems and the over-heating. There are so many threads that all seem to wind and unravel together that it takes your breath away. If you're not careful it can take over your own life, too.

I sometimes feel a bit guilty for taking time off and just getting out of town, immersing myself in other things – sea air and green spaces and old friends (most of whom have had their own life upsets), and conversations about music and art and love. There I am on the move again when other carers are stuck 24/7 with no respite and Nick can’t leave his flat or lift a spoon to his lips. But these little breaks are like vitamin shots for the soul, powering me up for the return to another onslaught of what the HELL just happened and oh God I didn’t see that coming. This is Huntington's - relentless, unforseen and unpredictable.