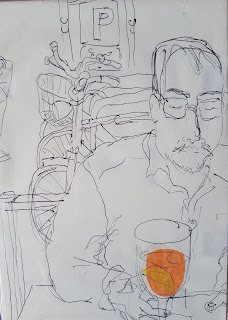 Yes, another one, this time for Nick.
It’s all packed – favourite shirts ironed and folded in his case, socks and boxers for the week, jeans and shorts, pyjamas, handkerchiefs and dignity bibs, an outfit he’s chosen for today hanging up and labelled on his wardrobe door, just the toiletries to pack this morning after he’s showered.
We’ve got his clock, his radio, phone and toothbrush chargers in a separate bag, even a pair of trunks in case he gets the chance for a dip.
Travel insurance certificate printed out in a folder, and – unlike your average holiday perhaps – his care plan and full medical details including dietary guidelines for a soft diet to prevent choking.

I’m picking him up in an hour after his morning carers have helped him wash and dress, and we’re setting off for the seaside!
A week at Sandpipers in Southport which is one of three specialist respite facilities run by Revitalise – a brilliant charity helping disabled people have a break like anyone else.

If you don’t know, then it’s hard to imagine the enormity of this. It’s not just about using a wheelchair. When you can’t sleep in a normal bed, when everything you eat has to be pureed and fed to you spoon by careful spoon, when you can’t be in one place for long without knocking something over or pulling a door off its hinges, the very thought of going on holiday is the opposite of relaxing. Unless it’s somewhere designed and run especially for people like you.

He went to the same place last year and it felt like a miracle. He absolutely loved it, just being in a new place (though this is not always easy for people with HD who can find a change of routine very frightening), being cosseted by the staff and chirpy young volunteers.
He was by no means the most impaired person in the room, for once. And everyone is just treated like the human being they are, not just a service user with special needs.

So I think it’ll be great for him and he’s really looking forward to it. While he’s away I’m going to
a) do nothing (probably not as I have a million things to catch up on, all the things that back up when you’re running around trying to get things organised for someone who can’t do it themselves. But maybe an indulgent morning in the garden reading a book!!!)
b) deep clean and sort out his flat, including the boxes in the cupboard that we stashed away when Nick moved in 18 months ago. There’s just never been time to get to them, there’s always so much going on in the day to day.

Also, knowing that he’s in such a good place and was so happy and well looked after last year has put my mind at ease; I feel we both know the ropes now.
It was a very close to the bone thing as we weren’t sure until ten days ago if funding would be approved. There’s no way we could have afforded it ourselves, especially as Nick’s care needs have increased and with that, his level of support. These things don’t come cheap, and when I saw last year how carefully staff looked after the residents, it’s not surprising, but it does make it hard to afford – living with a long term disability is expensive and disposable income tends to dissipate as care needs increase. But then, hence the need for a break, and hooray for Revitalise.

And hooray for our Huntington’s Disease Association advisor, Diana, who organised a grant at the last minute to pay for a big chunk of the fee.
When so many things seem so needlessly difficult (yep, looking at you again Sheffield City Council and we’ve by no means finished with the Ross Care saga after a thrilling Part Two last week) it is a wonderful feeling to have a door opening for you thanks to some of these guardian angels.
So I can’t thank the organisations who have helped us enough.

Meanwhile, it’s a sunny morning and we’re going to pack some tunes from Nick’s CD collection and go off on a road trip, just the way we used to. Even if there is a wheelchair in the back.