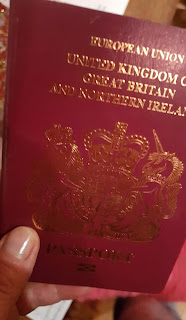 We’re going on holiday tomorrow. For the whole of the last fortnight I’ve been on a countdown – not the “ooh, just six more sleeps til we hit the beach” type, but “Can I get everything I can possibly think of in place in time so that we can actually leave Nick?”

I’ve written before about holidays because last year I had a long weekend in Italy with old friends, coinciding with a particular crisis beforehand that had me eaten up with worry.
It was hard to leave in the middle of it all, with things unresolved, worried for Nick's safety and me the only person that any official body was prepared to deal with. Some organisations don’t make it easy for carers (full stop) but they certainly don’t make it easy for you to take a break.

Our local council will talk to me and to no one else on Nick’s behalf; they’ve got my name, rank, serial number and have vetted my original Power of Attorney documents – fair enough, you might say, to protect a vulnerable person, but this is just to talk to the repairs team!
All I want to do is report a broken window catch or a fault with the boiler, not anything remotely sensitive. Just request a repair before he hurts himself – as when he’d pulled the radiator off the wall by his bed - or gets locked in the bathroom because the door handle had fallen off.
If that should happen when I’m not there, then woe betide if it’s an emergency, because they will only talk to me.
I’m giving you a silly example perhaps but as I think of all the things that happen in a typical week, and the total 360 degreeness of caring for someone with such a complex condition, well, just typing this is giving me a tummy ache.

While I was in Italy, Simon was home, holding the fort. He made me promise to switch my phone off and just relax and have fun, and in the end I did and oh, I really did and it was glorious.
This time we’re going away together and Nick will be superbly looked after by Helen, I have no doubt, but however sound and capable she is, she hasn’t encountered the 360 degreeness of making an emergency dental appointment for a broken tooth while dealing with wet trousers and another handle pulled off the door and the morning carers came at WHAT time? and there’s spilt milk all over the kitchen floor and the ESA payment hasn’t come in so how is he going to pay for his shopping, and oh God the neighbour is banging on the ceiling again and swearing through the letterbox.
That’s pretty much my normal, and while I don’t kid myself that anyone else with a bit of savvy can't cope, they still need to know all the phone numbers – the dentist, the care company, the social worker, the CPSO, the GP, the Uncle Tom Cobbley and all. Where to find the spare aprons and bibs and the batteries and who to call if... or if... or even if....

My list for Helen isn’t just a list, it’s a compendium. All the things to do. Charging the electric toothbrush, cleaning out the wax in the hearing aids, changing the cat litter, constant stock-taking for aprons and loo roll and cat food and washing up liquid and cleaning materials and not even to mention the food ordering for a special diet. Taking the hoover to be mended because one of the carers left it in the middle of the bedroom floor, trailing flex and all, and Nick tripped over it.
Counting out portions of chocolate, cakes and wine so that he doesn’t have them all at once (bitter experience); ordering yet another remote control and checking that the hearing loop is working.
It’s not rocket science. But...
If there were any continuity of care, or the carers were the type to do anything at all outside the box, I could expect them to do some of the above but they just don’t. And these are just small examples of domestic type things, not the big stuff, the financial and administrative tasks that take so much time and anxiety.
The point is, you need to understand that there is always a 360 degreeness with an illness like Huntington’s. Caring for an impaired person involves lots of little things that suddenly become big when they’re unattended.

I worry about the neighbour, who was banging on the ceiling again today and shouting at me in the corridor. He has left an abusive message taped to the door every day for the last ten days.
I've told the police, who say they'll send someone round to check in. It's not good. But we've covered everything we can.

Helen says, Don't Worry! Just go. Go and relax. I know she can deal with it, and that all the aforementioned on a daily basis would just make anyone into a massive control freak.
Nick says, Have a lovely time, Sis. And I think he is quite looking forward to a bit of a change and dome different faces. So we're going.
Expect a chilled out, relaxed, refreshed person to be writing in a couple of weeks with an "oh, what the heck" disposition.
Well  - here's hoping.

Email ThisBlogThis!Share to TwitterShare to FacebookShare to Pinterest
Labels: Carers' Duties, Dealing with it, Holiday, How to have a Holiday, Stepping Back, Team Nick
Newer Post Older Post Home