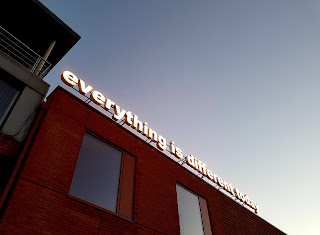 We have found a PA for Nick who has started taking him out for lunch midweek, and she is jolly and sensible and kind. She hasn’t batted an eyelid over the cumbersome wheelchair, while the others had been saying it wouldn’t fit into their cars or that Nick was too heavy to push, and last night she and her partner took him out to a gig!
I had a long chat with her beforehand to make sure she had all the information she needed, because seeing him in the evening is very different from a lunch outing. For a start, he had been drinking all day – I’d arrived around 1o'clock with his Saturday newspaper and he’d already poured a full beaker of wine.
So he’ll need a limit on how much he has to drink out, and to watch for him suddenly tipping backwards in his chair and capsizing it, which he seems to do when he’s had a few, or suddenly lurching forwards and bumping his head on the table.
He’ll need something manageable to eat, and his nightime meds that come in a different pack, and help to get undressed and into his pyjamas.
No problem at all. She was utterly unfazed. They had a marvellous time and today Nick is so happy. He went out on his own, with new people, just like a normal guy the way that he always used to, and if there were anything I could wish for him apart from not to have this wretched disease in the first place, it would be that.

And I cannot tell you the depth of my relief and relaxation – that knowledge that she knows what she’s doing and that I could absolutely trust her to look after Nick. It felt like - oh, like a clenched fist uncurling in my chest, and the kind of deep unraveling that I had on holiday but all too soon got taken over by crisis and fire fighting and the ongoing disappointment of things not going according to any kind of plan.
It made me realise just how untrusting and wary I have become - and for very good reason, because 99 % of his care continues to be unreliable.

The carers don't come in on a Saturday lunchtime as he normally goes out then; because he was going out in the evening instead, I did his lunch and tablets. As I was signing the medications sheet in the carers’ folder, I noticed what time they had come to give him a shower, get dressed and have breakfast – 11.45am. So he would have eaten his porridge around 12.15, about forty minutes ago.
On a normal day, they’d be coming back within the hour to do his lunch. Nick is so stoic but really, I can't bear it.
I’ve made a fuss about the timings and for a little while it improves and then soon slides back into them turning up ridiculously early, ridiculously late, at any old stupid time. Yes, I know it’s a win that someone helps us out and that they turn up at all, but there are just so many variables and the enforced feeding of meals at stupid times is such a constant erosion of all Nick’s rights and dignity.

It gives me a permanent lump in my throat and knot in my stomach, a feeling of anxiety and pent up rage that just won’t go away – a silent scream that this just isn’t right. And remember, I know, I have worked as a carer for one of those big contract agencies, and it is just absolutely shitty how people are treated. I hated going in two hours late to a poor lady unable to get out of bed unaided, who might have wet the sheets and be sitting there crying, humiliated and hungry and alone.
I would have a rota with six other people before her, and barely any time allotted for crossing the city during the morning rush hour, of course everyone was constantly running late but it was shameful.
Invariably I would tell the agency so and beg them for more appropriate timings for the bed-bound and needy, invariably they would promise to "escalate" the issue but we both knew it was the equivalent of closing your eyes and going, La la la I can't hear you.
Really, the whole business of social care, and local authorities using the lowest common denominator for their contract agencies, is just a soul-curdling thing.

So I continue to look for another provider, and this seems to be much harder than you would think as Nick's needs are complex but the address seems to be the real deal breaker, living as he does on the cusp of two postcodes. But in the meantime there is lovely Helen the PA, just for a few hours a week, and oh my goodness what a game-changing blessing that is.