Biting the hand that feeds, Baby. 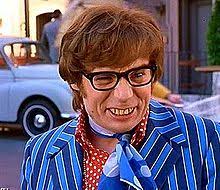 I really, really, really need new glasses. If you are as short sighted as me, these don't come cheap, and this has brought on feelings of panic and mutiny, because as a carer, I seem to fall between the cracks for help with the costs.

So let us get this straight.
I am on Carers’ Allowance, which is nearly £10 a week less than JSA, Universal Credit or whatever is currently being rolled out, as they say, in your area. Yet JSA would qualify me for free or heavily discounted optical and dental treatment, and Carers' Allowance does not.

To qualify for Carers’ Allowance in the first place you need to be actively caring for someone for 35 hours or more a week, which considerably more time than someone on JSA is expected to spend looking for work.
True, no sanctions or interviews or mandatory job experience at Poundland for me, or having to prove what I have done every minute of the day to seek gainful employment; although try asking most carers to account for each hour they have spent and everything they have done in a typical week of caring and if they had to log all that to qualify for their weekly payment you would probably break the internet. The whole system would explode! And who at the DWP would have time to read it?
In order to be eligible for Carers’ Allowance in the first place, my income had to be under the limit of £116 a week (now £120) for the two months before applying.
It was a relief in a way to drop some hours as the combination of the four-day week I’d been doing with the sudden addition of 35 hours (at a low estimate) of unexpected brother care, was a killer.
I was waking up panicking and fighting for breath from the sheer shock of it all. I had become a bona fide carer almost overnight, but could not be officially recognised as such until I stopped earning money.

It felt like a real catch 22 to have to agree to be poorer in order to continue doing a new job that I’d not applied for or expected to be doing with such a high level of responsibility, with no training, and essentially unpaid apart from this small stipend.
But I was glad to have it too, even while the catch 22 was staring me in the face.  If I was going to be doing 35 + hours a week looking after Nick, I might as well get some kind of acknowledgment and regular payment for it, even if I then couldn’t continue to do my job the way I had been or get paid a decent wage.

The absolute maximum you can earn as a carer doing 35+ hours of support, plus working part-time, is £185 a week. Bear in mind that the average weekly wage is £520. According to Paul Lewis the financial broadcaster, when you take into account all the hours worked by the average carer, this is not even approaching minimum wage, with no legal access to earning more.

I understand why you’d need to put a limit on hours worked in addition to your caring role but why the earnings cap? Why can’t you work for sixteen hours at a good rate?
Unless you’re very lucky with your employer, doing such a relatively small number of hours tends to mean working at minimum wage and even zero contracts.
Why force carers, who are saving the government and NHS approximately £60 billion a year, into badly paid work? It seems particularly cruel.
Why can’t we work smarter for a limited number of hours at a good job that would help support us, the person we care for and our families, and help us from being a burden on the state?
A limit of hours worked AND on earnings is fundamentally a poverty cap and suggests that where this legislation is involved, carers are held in contempt.
I was never a high earner apart from (ironically) a short stint doing research at the DWP, and I’m used to living in a fairly low-impact, resourceful style, and have always felt abundant in other ways.
But these days as a carer I realise I’m earning below the official poverty level and I bet I’m not alone.
According to a recent interview with Caroline Dinenage, Minister of State for Health and Social Care, there is "no more financial help available" for carers. The government pot is too stretched.
OK. But why, if carers are condemned to a low income not commensurate with the amount of work they do, are we not at least given help with the costs of dental treatment and glasses?
Seriously, baby. I can’t be the only carer who is short sighted with astigmatism and English teeth.

I am allowed a free eye test, yippee, but I could equally have one of those if I pick up the right coupon from the supermarket. And yes, I know there is a low income voucher scheme if you apply to the NHS through form HSC1, but it still feels insulting to make carers jump through yet another sodding hoop to fill in yet another form and justify their existence.

I mean real help towards the things that actually matter – eyesight, teeth – that can cost a chunk of your money if you are not deemed exempted. Carers need to keep well, and most of us need to drive, (and to be able to see to fill in those endless sodding forms) and eyes and teeth need maintenance especially for the high percentage of older carers.
Why can’t that be acknowledged with some practical support?

And as for a massage or some physio for my permanently aching back from lugging a wheelchair in and out of the car and a thousand other little daily tribulations, tell me that other carers don’t long for these and I won’t believe you.
We need to stand up for our rights.