I have moaned, oh how I have moaned, about my brother’s carers. And with good cause because they have driven me halfway up the wall.
But when the weather is as extreme as this – when the snow just keeps on coming, when the roads are so bad that ambulances are getting stuck and having to be bailed out by volunteer mountain rescue – when buses aren’t running, when schools are shut and routine hospital appointments are being cancelled – spare a thought for the legions of carers who carry on doing their job in the foulest of blizzards.

I worked for a care agency a few years ago during the last spell of memorably heavy snow (though I don’t think it was anything to compare with this Beast from the East) and on a day when school was closed and my husband worked in another town and was told not even to try to come in, my son couldn’t understand why I was still going to work.
“Because people need medicine and food and to go to the loo, even when it’s snowing”. 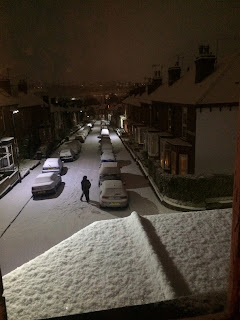 Yesterday I trudged the ten-minute trip down the road to my brother's flat as if it were an Arctic expedition. It was mid morning and he was still in bed, the flat in darkness with the curtains closed and the cat was wailing for food. But to my amazement the carers had already been in first thing to give him his morning tablets (and, it turned out, already fed the cat, but you know what cats are like) and prepared him some breakfast. They came back a little while later to help him get washed and dressed, and I realised again just how grateful I am that someone else is doing all that – for all my mutinous thoughts of firing them and taking on all the care myself, there’s no way I could do it really.

They said they were running about two hours late but just about managing to get round all the people on their list, prioritising anyone in need of medication. Food and personal care (that’s help with using the loo, folks) next, and then all the other stuff, like just making sure people were OK, would still happen but not necessarily to any kind of normal timescale.
I was just impressed that they got there at all, because their average rota takes in several postal districts across the city and even on quite big roads the gritters can’t keep up; even the small amount of traffic is crawling along pathetically, the snow keeps coming down, and honestly it is mental out there.

So to all the carers and health workers who can’t just look out of the window, decide they’re having a snow day and go back to bed – who put on their big coats and boots and simply get on with their work to help the frail and needy whatever the weather, a massive round of applause and my heartfelt thanks. You are brilliant.
It might be a snow day for some of us but for many people it’s really a matter of life and death.