It's what I’m wishing for in 2018, a fine vintage year of mellow fruitfulness. One that lingers on the palate and in the memory - sociable and warming but easy on the pocket as well as the old grey cells. A Grand Cru, Chateau Pearson 2018. Well, we can only hope!

Christmas seems such a distant memory, even though we’ve still got the cards and decorations up, and all the excitement and bonhomie of New Year too.
Today it’s drizzling and my head is fuzzy and it really feels like that sudden unwelcome bump back to earth and back to reality.

I bought Nick a new diary for the year ahead, and put the 2017 one in the recycling. Then I took it out again as I realised he has kept all his diaries for the past fifteen years and maybe he wants this one too. A record of a year in which he made no entries himself but the pages gradually filled up with appointments for health professionals and all the details of his move to Sheffield. Then: benefits advice lines, social services, council tax, housing and emergency accommodation officers, builders, plumbers, support workers, care providers, hospital, dental, medical appointments, butcher baker and candlestick maker and Uncle Tom Cobley and all. The strange itinerary of someone whose body is no longer entirely their own affair.
There are some fun things there too – his weekly outing to the pub or the cinema with Simon, his Saturday lunch with one of the carers from my old firm, the odd drink with his old friend Dave.
I'm determined that this year will have loads of those and we'll be kicking off with a party next week to celebrate Nick's birthday.
But in the meantime, here's the sobering reminder of how much things have changed. The diaries tell a story better than words. In 2004 he was running a business and doing some catering work on the side for his (then) in-laws. Married. Cooking. Driving. Not socialising much, a toddler at home and another baby on the way, a hard working family man. 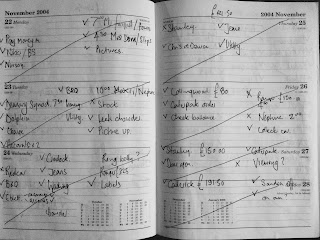 By 2013 he was living alone, separated but seeing the children at weekends, still working and driving but not for much longer. This was his manic phase, making sense of life by writing endless to-do lists and ticking them off.
A year later he was still making lists but his writing is wobbly and wild. By 2016 he had stopped making lists and his diary lay on the kitchen counter open at the wrong week, no entries at all unless they'd been made by me. That's when I knew it was time for him to leave. 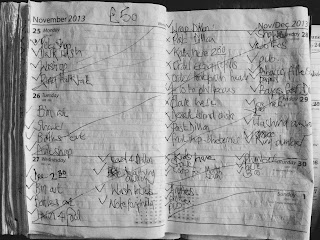 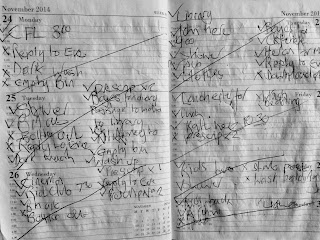 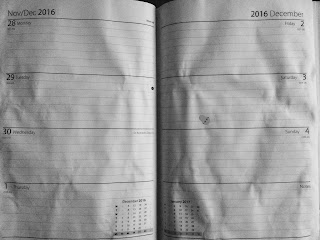