Here's looking at you, Kids

Eight years ago today our dad died. I got the phone call early in the morning and went back to bed for the rest of the day like an invalid.
It was the first day of the autumn equinox and later that afternoon my brother sent a text saying he had been for a cycle ride and imagined that dad’s spirit was in each autumn leaf that was blowing in the breeze.
I still think those are beautiful words. He always had a gift for saying the right thing. But today when I remember that text and it is so close to my heart, at the same time I am thinking, wait a minute - my brother cycling?? Because these days Nick can barely walk let alone get on a bike. 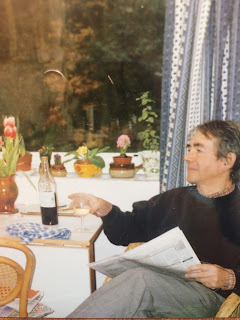 Dad, as it happens, lived a full and loving life, travelling and smiling to the last. The Huntington's gene was on my mother's side of the family.
After she died he remarried and found a happiness he couldn't have dreamed of during all the long lonely years of looking after mum. He did this on his own, her sole and stalwart carer, while still managing somehow to hold down a full time job. He really played it down too, just getting on with it like the Yorkshireman he was, though I look back and wish that I had read between the lines of his cheerful communications, seen through all that perseverance and done a bit more to help.
When people read this and say things like, "you are so good to look after your brother like that", I just think of Dad and whatever I do for Nick doesn't even begin to come close.

Huntington's is one of those unpretty conditions that can quickly isolate everyone affected in their own different ways, and which inevitably involves not being able to do things for yourself, which inevitably involves care. Usually that care starts with the direct family - sometimes it's just too hard and not everyone can cope but most of us do what we can until the point where the illness becomes unmanageable.
It's just about love really isn't it? We do what we can and a lot of the time it's not much or not enough. I don't think you ever get it right. Dad did everything he could for mum but he was only human and I'm sure there were times he felt like strangling her, or just walking away. But he set me a fine example of how to live and how to keep on opening my heart and just do what is necessary.
So this is for carers everywhere, everyone looking after a family member or a friend. Raising a glass. It's what Dad would have wanted...