Our mother died 28 years ago today. She was 57 - a year younger than I am now. I wrote this memoir a while ago but it felt like a good way to remember her today, especially with memories of my brother's earlier lives so fresh in my mind. 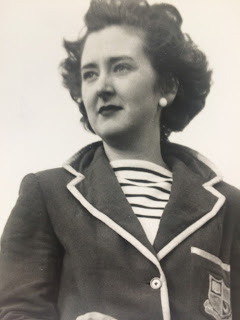 The morning of my brother’s wedding we found my sister in law to be walking round and round in circles in the garden, curlers in her hair, talking aloud to our mother.
Welcome to the family, I thought. Ma had been dead for ten years but she was still a very living presence among us.

And yet, just like my sister in law who has only known her from stories, I wonder if I ever really knew my mother. She changed so dramatically while I was still quite young, so that we never really met each other as adults – certainly not as woman to woman.
So this is an attempt to reconstruct her image, looking at snapshots from a family album, noticing the changes as they happen gradually over the years. Maybe, like photos, none of them really capture the person herself but I’m glad to flip the pages and remember her anyway.

1969
My mummy has blonde streaks in her hair and a suntan. She wears pink suede shoes the colour of crushed strawberries and cream, and a suede chain belt. She does costumes for the Dramatic Society and sometimes does some acting too. In her handbag there are sticks of greasepaint with exotic names like Light Egyptian alongside her own pink lipstick, which I love because it smells of roses and it’s worn into a spindly point. I try it on sometimes and try to imagine how she could get it into a funny shape.
Most little girls have a phase as they grow up when they want to marry their dad. I think I would have liked to marry my mummy. To me as a child she is the epitome of womanliness and style.
My mummy is mild mannered, girlish and shy, though sometimes she says rude words.
Although she grew up in the city, in what is now darkest Pitsmoor, she knows the names of wild flowers, trees and birds and where to find them; which mushrooms are poisonous and which will be good to eat, and the shapes of clouds and what weather they will bring.
She sings us songs, some of them in Irish. Her voice is sweet. You can tell that she and my daddy are very happy together.

1979
On holiday in Scotland, we have just left a hotel at 9o’clock at night because my mum refused point blank to spend another moment there. Having checked in earlier, she suddenly decided that there was something horribly wrong with the room and that we couldn’t sleep there.
True enough, as we do finally check out, we discover that there has been a suicide in the room next door and as we are leaving we actually see the ambulance crew and the body being taken away covered in a sheet.
And true enough, my mum does have a sixth sense about many things, but she is also becoming a social liability.
At this point, none of us quite realizes, except my dad perhaps, that she is ill.

In Edinburgh she totters unevenly along the pavement in unsuitable heels, talcum powder erupting bizarrely from her shoes at every step, speech just slightly slurred, and a boy nudges his friend and points – “Look at her – she’s steaming”
They think she’s drunk, and she’s not – it’s not even lunchtime. We silently close rank to her defence, but we’re embarrassed too.
Her obsessions – the copious talcum powder for instance – and her sudden, frightening bursts of hysteria – these are things that distance her and make it hard for me to accept. Hard to confide in her when one minute she’s gentle and chatty and ready to listen, the next she’s off like a banshee.

I tell her my dream of one day going to New York to study film.
“Do you want to kill me?” she cries at once. “If you go to New York you will kill me! It’ll kill me!!”
For the next three weeks and beyond – “You’re going to kill me!” and sometimes, more pathetically, “Don’t go to New York, please, please don’t go. You know you’ll kill me.”
Me: “Mum. I’m still at school. I’m not bloody going anywhere”

And so it becomes increasingly hard to really communicate about the things that matter. So few things I dare tell her in case it sets her off. So hard it feels to understand what is going on in her head, even if she would tell me.
Which means that little by little, we just sort of lose sight of each other somehow.

1989
Ma sits like a broken doll in her pink high backed chair.
“What kind of soup would you like today?” I ask her.
“Chi’en.” She can hardly get the word out.
I prop another cushion behind her back. Everything in this room is broken or stained. Ma has so many accidents.
Today she can’t get comfortable. Her voice rises anxiously as I stir the soup in the kitchen next door – she doesn’t like to be left alone for long.

My dad is in hospital overnight for a minor operation and she won’t have any truck with respite care, so I take time off and come up from London to look after her for a week.
Looking at her delicate skull under thin whitish hair that was once so wavy and rich, I feed her soup a little bit at a time with a baby’s plastic spoon and feel a mixture of emotions: pity, guilt, revulsion sometimes, love much of the time, sorrow all the time.

Ma sits day after day in her chair, staring at the television or the wall, body disobedient and battered, being helped to the toilet and in and out of bed where she lies like a lump for hours in a drugged-up sleep.
Sometimes I still can’t help thinking, For God’s sake, snap out of it! I know you’re just pretending!
But that’s my denial, not hers.

It’s just that – even in her advanced stage of illness, unable to lift a cup to her lips, unable to feed herself or eat much without choking, hardly able to speak coherently let alone write, this week while we’re here together she makes such a gesture of love. It’s as if the mothering instinct and the urge to comfort her child somehow overrides her own pain and makes her suddenly lucid again.
I’ve come home for this week in horrible misery, caught up in a stupid love triangle that feels like a torment I’ve gladly escaped from.
Ashamed to talk about it, I try to keep it from her and make my long unhappy phone calls late at night when she’s asleep, and cry when she’s asleep – grieving for her and all our lost times as well as for the fucked up relationship.
But after my dad comes home and I have decided to take a bit more time off and stay a little longer, I find a card on my bed written in her half legible useless spider’s-scrawl writing saying, “Don’t worry darling. It will all be alright. We are both so proud of our lovely daughter”
It breaks my heart. And it makes me see so clearly that within that sad shell of a body and unknowable mind, my mum is still there in spirit.